To say that the big cat phenomenon has gone quiet would be a severe understatement. It can only get bigger . During the last few weeks every bodies attention had been drawn to the escaped lynx from Dartmoor zoo. when this thing happens one gets peoples views on the subject.Most people did not want the poor animal to be caught and placed back behind wire, and many people thought that it should remain in the wild to find a mate and live how it should do. Yes people know that there are many wild lynxes throughout Britain doing just what they did before they became extinct. Not many people kicked up a fuss though ! but one lady claimed to have run one over and just assumed that it was the escaped individual ! did anyone follow it up ? if they did we will possibly not know about it. It just goes to show that people report things at certain times due to media activity when they otherwise would not.It is unfortunate that the animal killed a few lambs; this is not the normal thing for a wild lynx to do as they prefer wild animals but a young animal may occasionally kill livestock. most large cats rarely or never attack livestock but with so many large cats now living in Britain, it is inevitable that a few sheep,cattle or other form of livestock are taken. Again, most attacks on sheep are from domestic dogs.

On other notes, due to my escalating illness, I am unable to do much field research, but I can do lots more in the way of advising people and directing willing people to go out and get results. Many more people are becoming interested in the subject as more and more evidence comes to hand. I have had several interested people finding all manner of evidence lately, usually in the form of footprints and scats. Here are one or two pics from this summer from an active area of mine. 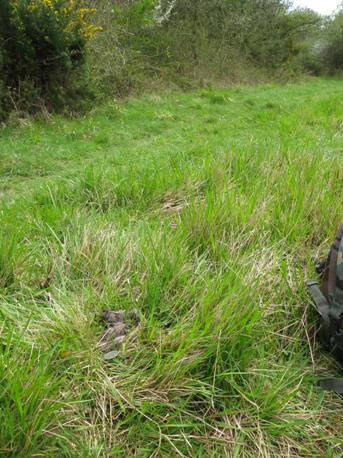 Most of the old territorial areas are now out of bounds for me and I have to concentrate my findings from areas where I need not do much walking.The good thing about large cat research is the fact that one does not need to go to pristine wilderness and walk for  miles. One can simply pull up alongside a busy main road where lots of people go to walk their dogs in a local park and find evidence often. Many pumas and leopards live in towns and cities, even in Britain but are not often seen by people.On the other hand most people would not know what to look for !

A woodland ride may be visited by a territorial male or female cat and regularly leave tell tale evidence in the form of scats in this case,a male leopard visits this particular area every eight to fourteen days and deposits scats in several areas.Two feet from the main path a scat lies in the shorter grass for other leopards to notice. 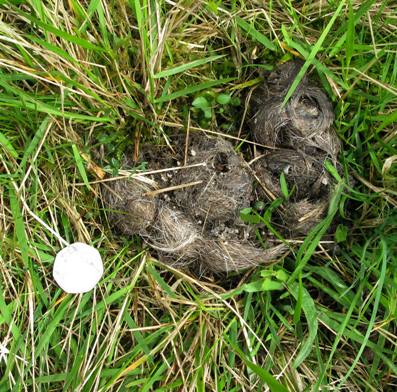 The scat is made up of deer fur, and is deeply twisted like most leopard scats, and is very large. A lot of this scat was buried by dor beetles.(common dung beetles)Within the scat can be found the hoof remains of deer along with deer hairs, skin and bone.

One can see four due hooves from a roe deer embedded within. 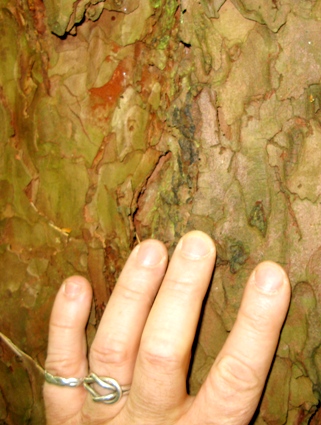 Nearby, the tell-tale evidence of the cat using trees.Claw marks are visible in the typical way. Below is a leopard hair caught in the shaft of a cormorants tail feather. Both leopard and puma will eat these large birds and I have found much evidence over the years that leopards love them.Sometimes heron,Canada goose,mute swan and cormorant remains have been found half a mile away from the water. Large cats like to eat in peace in areas they know and feel secure in, even if it means taking the food item into thick forest. 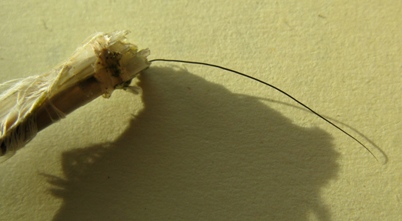