Every year when holiday season gets going, less large cat sightings are reported and less field evidence gets reported in. the movements of people seem to effect the movements of cats, but as usual I get reports from people being on holiday in Dorset and they see a large cat or two.Several recent sightings have been of multiple animals such as four leopard sized cats together, or three lynxes. this is circumstantial evidence of breeding, along with my own sightings of cubs in the past.Unfortunately I have been unable to get out much lately to study these animals and my own studies have vertually come to a halt due to my medical conditions, hence the lack of info lately.I have finished writing my book the British Big Cat phenomenon, the Dorset enigma, and am now searching for a publisher. any offers ? Below id the carcass of a roe doe 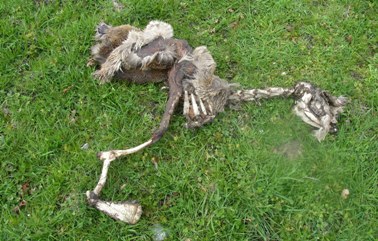 carcass that had been turned inside out by at least one large cat feeding from it. More pics to follow soon.