On the 9th September, myself and six other folk from Britain plus one man from the Netherlands and two people from Australia ventured into the Sumatran rainforest to help search for an elusive animal (see below) unknown to science.

Pictures one: The Scenery and our Group

Pictures two: The Animals of Malaysia and Indonesia

Sounds of the jungle one: treefrogs and cricket

Sounds of the jungle two: tree frogs and cricket 2

Sounds of the jungle four: five frogs and thunder

Charles Forte was a naturalist and explorer interested in unknown animals, he dedicated his life to searching the unknown or unusual. There are many animals and plants and fungi that still await exploration and are not yet known to science. Every year scores of invertebrates, fish, reptiles and amphibians are newly found, mainly in parts of the world that have not been thoroughly investigated in the past. A few mammals and birds are also new to science. The C.F.Z are particularly interested in cryptids,  Animals that apparently exist according to many eye witnesses but seem to defy most attempts to gather real evidence by mainstream science. Cryptids are not figments of people’s imagination but real animals that for some reason are so elusive, rare or just overlooked. Many are animals that once did occur but later became extinct, or animals that feature in human folklore but have never been proven to exist by science.

The C.F.Z  may look into various stories of animals and try and figure out whether they exist or not. Some types of animals such as lake monsters often turn out to be only giant fish or other animals. We are an international organization not concerned with peddling silly stories of impossible animals but truth seeking, and obtaining evidence wherever possible of many cryptid animals.

One such animal is the Orang Pendek an Orang utan like ape that inhabits parts of Sumatra in areas where it cousin does not exist. There are many witness reports from mainly farmers that live on the edge of the jungle. This animal has many human like qualities such as the ability to walk  in a bi-pedal manner, Jump as well as climb trees. The animal has been searched for by a number of organisations over the years but not much evidence has cropped up. The most compelling evidence has been found by our own organization in the form of sightings made by C.F.Z members, hair samples and footprints. Some members of the team that I joined were those very people responsible for obtaining such exiting evidence. Some of those members have been many times to the area in a desperate bid to search for more evidence. The Sumatran rainforest is so bio diverse and yet it is being destroyed at an alarming rate. There are many species unknown to science awaiting discovery. If the Orang Pendek still survives in the remote highlands of this amazing island then it must be preserved and the forest with it. Time is running out. There may be many large species of mammals that have become extinct within a few decades as a result of habitat destruction or because they were unknown to science. Scientists may not have believed that certain animals have existed, and this is one of the major hurdles to cross. It is worth remembering that the lowland gorilla was such an animal, it was not believed to exist by modern science despite many tales of it being seen by hundreds of native folk. It was found in the nick of time just over one hundred years ago. Cryptid great apes deserve our undivided attention. Yeti, Almasti, Bigfoot, Mande Burung or orang Pendek, all deserve an acknowledgement from mainstream science that they may indeed be real and need proper assessment, funding into research, biological research from dedicated people.

There is no proof that these animals do not exist.

Yet, there are so many witness reports and in many cases photographs, footprints, hairs and faecal matter. Evidence of feeding,  nests and sounds.

Any scientist who scorns at such subjects is certainly no scientist at all, for the very definition of the word science, derived from Latin, Scientia means to search for knowledge, and to seek means to find, and to find means revelation.

I believe that some of these animals exist because I have seen the evidence.

Two teams spent two weeks in different locations to where the Orang Pendek has been reported to live. We interviewed witnesses and they told incredible stories of not science fiction but tangible stories of simple animals not much different from the other beasts that live in the jungle. The witnesses have nothing to hide, gain, or lose in mentioning about their sightings.

One man who has farmed in a large clearing in the jungle for thirty years saw the Orang Pendek once as it ran away from his little hut. It had been several times before and left its footprints and once it had broken a wooden plank from off the side of the hut to gain entry to steal a bowl full of sugar. The farmer grows tobacco, citrus, chillies and potatoes. He said that it ran on two legs like a human but also like an Orang utan, with its arms raised above its head, almost as if in a submissive Gesture. It also jumped a small distance on two legs. Its fur was long and red brown, although other witness reports claim to have seen dark brown or black fur. It is on average smaller than the largest Orang Utan and with a more human like face. The son of the farmer had also seen it once. They believe it to be very elusive but they hear it calling from the jungle often. Our team also heard a sound that could have been emitted by the Orang Pendek. One night just after eight o clock after we had all hone to bed, a primate called near are jungle camp, perhaps within 500 yards. The sound was unlike the gibbons that were always over a mile away and unlike the sound of macaques or leaf monkeys. We also found footprints of a strange animal that was unlike the spoor of tapir, tiger wild boar or monkeys. Plaster casts were taken of some of the better examples but definition was poor due to the nature of the soil. A faecal sample was taken from a low plant from under a tree. Hairs were obtained by the other team that were higher up the mountain.

There was a multitude of wildlife especially frogs and toads and amazing invertebrates especially insects. The jungle came alive at night with all manner of camouflaged insects revealing themselves. A walk with a headlamp attached was very revealing. Crickets, cicadas, hornets, cockroaches of so many different species, tree frogs, ground frogs, millipedes and centipedes and spider emerged from the damp vegetation to give us much fascination.

Kuala Lumpur is a wonderful city. I call it the jungle city as the real jungle can be seen in areas of the town. Vine trees full of wildlife can be found within the heart of modern built up areas. Bats can be seen hunting for insects at dusk, geckos are around every corner and interesting insects abound. It is a modern city with top of the range western shops, restaurants and outlets. Modern architecture puts many other cities to shame. The Petronas twin towers dominate the skyline. These are a few photos of the city and some of the buildings.

We were horrified to see a man with harmless snakes being displayed as dangerous cobras in the square. He was holding them and teasing them, kicking them and making out that he was a macho man. The large python was striking out of desperation but had its mouth taped up. A dying mangrove snake lay draped across the basket in which they travelled in. We went away for a few hours and came back to the see the large python in a similar state. This is a disgrace and I am appalled that the Malay authorities still allow this kind of thing to go on. Picture five is the team, looking very worn out. 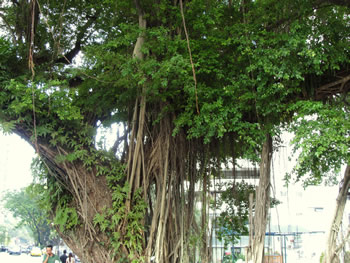 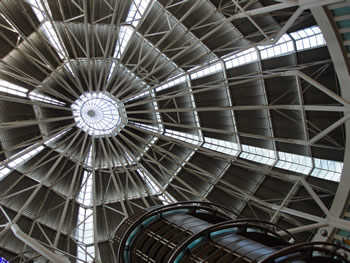 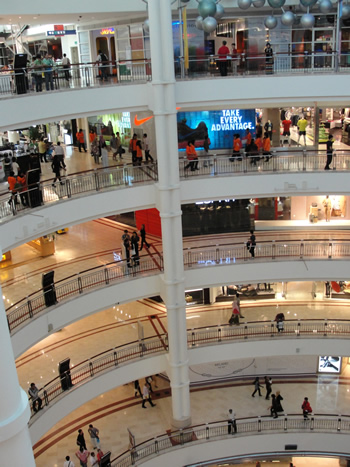 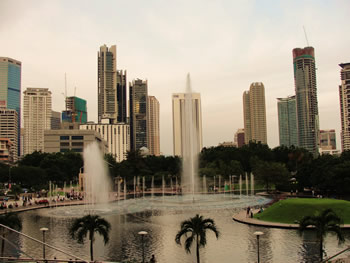 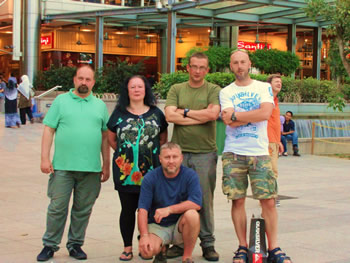 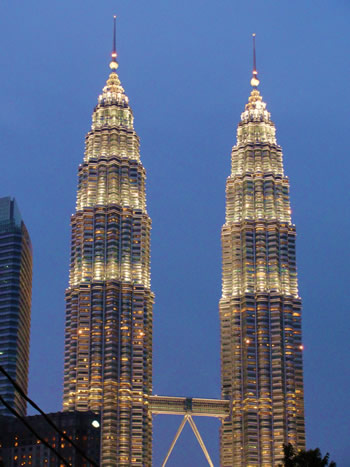 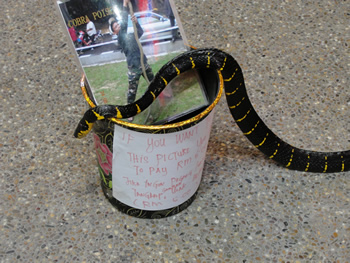 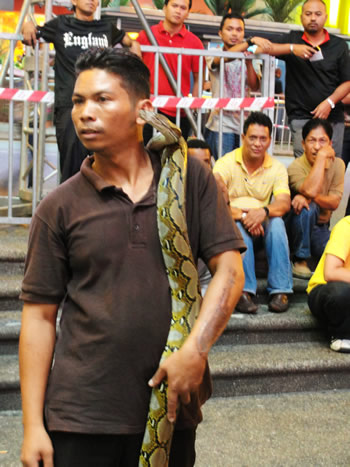 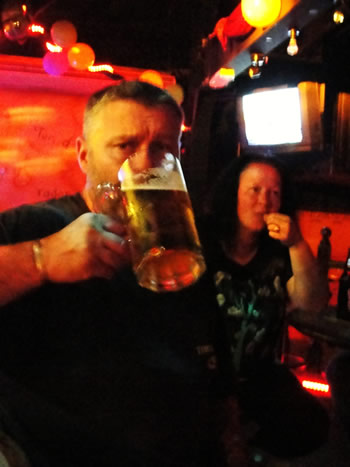 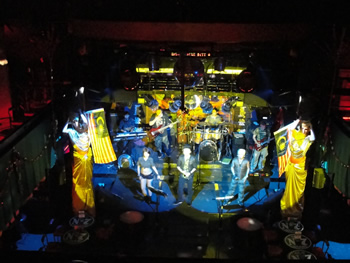