Posted on 5th December 2016 by jonathan

Local people who live around Bournemouth ,Christchurch and Ringwood areas will no doubt be aware of the new surface to the A338 Bournemouth spur road to Ashley heath roundabout. It has been recently re-surfaced ,widened in some areas and has been dubbed as the greenest road in the south ! I beg to differ. the road is far from environmentally friendly, and in fact is just the opposite.The road now has a concrete barrier within the central reservation for the whole of its length, when before there were steel rails that did an adequate job of preventing runaway vehicles from entering opposite lanes. Now, wild animals cannot cross the road for almost the whole of its length. In fact the road has become a death trap to all wild animals and has posed an even greater threat to motorists as deer try to jump the wall, people in vehicles cannot see what is coming over the wall and so plough into anything causing huge damage to themselves, their vehicles and off course other road users. What gets me is the fact that in the Bournemouth echo, the road was dubbed the greenest and most environmentally friendly road to be rebuilt! how and why can this be? The road is a disgrace where the wall comes in. All wild animals need and have to roam freely to be healthy and spread their genes. Too many barriers such as main roads, railways, and fences are so detrimental to the welfare of wildlife. The whole of the UK is covered in railway lines and dual carriageways causing much distress to mammals. It is bad enough building more roads and railway links and if the HS2 happens then that will be absolutely atrocious. We cannot keep doing this just because of the fact that humans breed like rats and need more and more of everything. When will it stop ? Since the new road has been overhauled, I have seen foxes,badgers,polecats,muntjack,sika,roe,fallow,otters and other animals dead at the centre of the road, been unable to cross to the other side. There are three main areas where mammals cross this long section of road and none of them were earmarked for tunnels ! why not? i would like to know who was on the planning board . It seems yet again that Bournemouth borough council has not given a dam,n for wildlife and conservation which of course ids normal. They have a very bad reputation regarding this issue.

In the photos, muntjack and sika deer lie dead at the roadside when they may have made it across if the concrete barrier was not there. 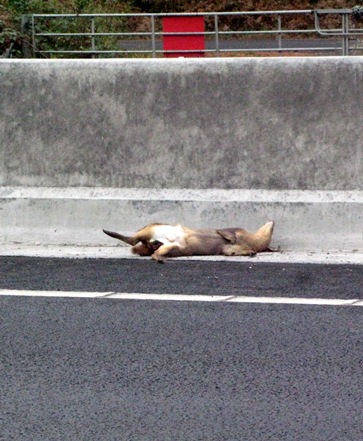 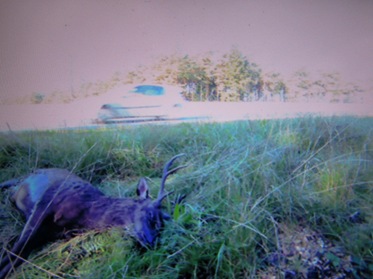