The Roe deer (Capreolus capreolus) has just finished rutting. The smallest native deer species to the UK, the roe has differing behaviour and rutting times than the larger species which rut between September and November, and grow antlers during the summer months. The roe grows antlers during the winter months, from November to May.The bucks rut at the end of July or august and are triggered mainly by hot weather and lessoning daylight.Hormones kick in and the bucks behaviour changes.He becomes stuck to a territory where he chases away any young buck. these youngsters often have to run the gauntlet of many mature stags before they find a vacant area of woodland to call their own.It is then that many young roe bucks perish on roads,rivers and other obstacles. The mature bucks stand their ground and it is the time when one can get pretty close to them without them panicking as they usually would. 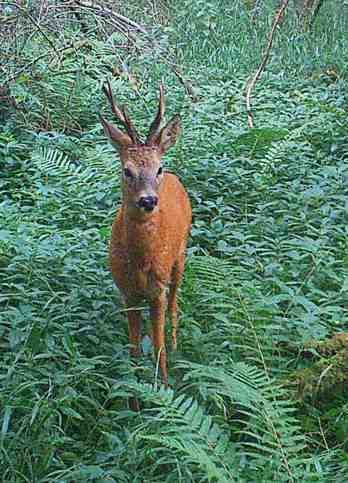 The much smaller muntjack deer ( Muniacus reevesi) is native to china and has established itself over most of southern and central England over the last century after escaping from private collections. the size different is apparent ,but many people do not know which is which and often ask how to distinguish between the two. the roe is much larger in body and has longer legs and neck with dark and white around the muzzle with tiny, often unnoticeable un-branched antlers which are just spikes with some smaller pseudo tines at the base. The deer rarely venture into open areas during the day and are most likely to be in thick cover. In some areas where they are common i have noticed that they do not do as much damage as some people claim and large numbers can live in suitable habitat without destroying the wild flower under-story.

There is much misunderstanding of this species and all other native or none native deer in the UK and over the last decade, war has been waged between farmers and conservationists to a silly extent, based on proper-gander and ignorance. Deer are hardly the pests some folk make out and to be honest we need them to keep a healthy balance within the ecosystem. we need their browsing and grazing, we need their droppings in the ground and we need them to be food for many other mammal and bird species. There has been a huge surge in deer numbers throughout Britain over the last twenty years, but now things are balancing out mainly due to predation from natural predators.The native and none native species of cats are helping to keep their numbers in check and keep them healthy. Whoever says that deer have no predators in Britain are very wrong and are fuelling the mass Eco-fascism. 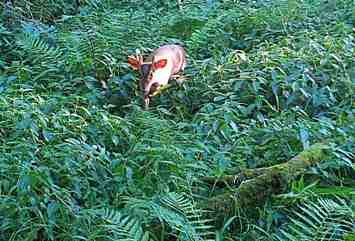