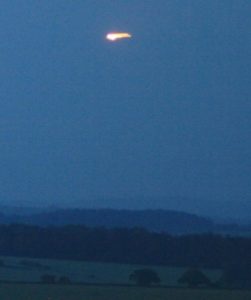 Many so called ufos are visible to the naked eye, but the vast majority are not and are only visible via infra red spectrum via a night vision scopes of good quality. Many of the visible types with the naked eyes also hide themselves as conventional aircraft and good binoculars or camera is needed to view them closer and see the actual shape and the movement of the crafts. Many have flashing lights similar to a conventional aeroplane and may use this as cover. Many of these types are shape shifters and can change shape,colour size. 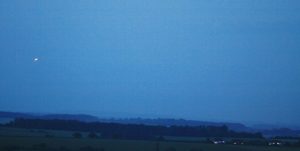 many craft hover without a sound above villages and countryside observing

I often in the past just point my camera at a patch of sky and although i see nothing at the time, when check after there will be an anomaly. 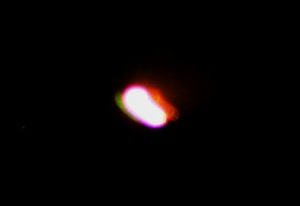 When close by such as this one which hovered above me, many colours can be seen and no apparent shape is visible at first but as it slowly moves about, a shape can be picked up 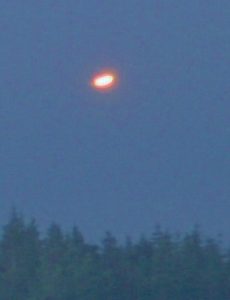 After the sun has gone down, and the wind drops the craft arrive and can usually be first glimpsed as orange glowing balls or ovate shapes of light. 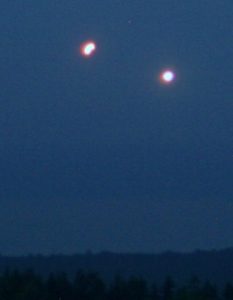 Other craft join the single craft and then they manoeuvre about doing what they do. 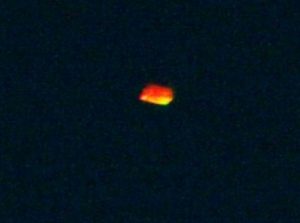 The lights are beautiful and mesmerizing. 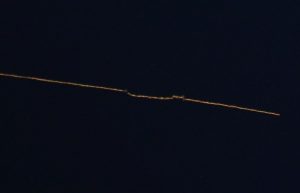 rods and stick shaped craft appear, some can be traced using slow shutter speeds and the movements of the crafts trajectories monitored and then real conventional aircraft can be eliminated from space crafts. 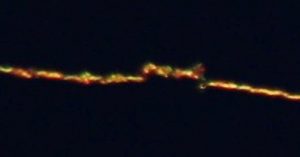 Then when zoomed in , one can see them for what they really are. 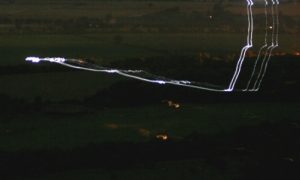 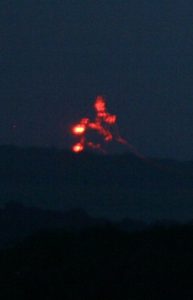 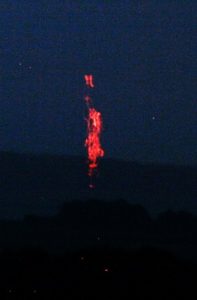 Plasma emits from the two craft and they join together with plasma ribbons which are not always visible.some ufos seem to tap into out electrical supplies from overhead pylons. sometimes the ufos themselves cause discharges about them for unknown reasons to me. ~the charges may be invisible to the naked eye or they may be seen as flashes like lightening. 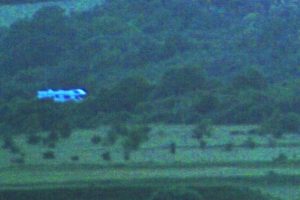 At other times the craft are very science fiction like shapes rather than just ovoids but they can change their appearance in an instant to hide.The craft often materialise for another dimension, but partly physical. some craft suddenly fall from the sky but also at the same time enter into our dimension from elsewhere. It doesn’t make sense regarding our current knowledge regarding the laws of physics and just goes to show that we have a lot to learn about that and what we think is set in stone.this photo is real, it is a real craft and not a camper van or other human vehicle. It is huge, as big as two buses side by side at least. It appeared at the same time as a dimensional entering from another space craft that fell from the sky but at the same time entered our physical dimension and then changed shape into a glowing light ball. It then changed into two and both moved about the ground in a coordinated scientific like way before changing several times and working around a field system. this data was only available to me and the person at the site because it was seen through night vision technology. Most of the craft seen by me are also viewable with night vision and to be honest one can see much much more with it but there is plenty to see without and just simply photographing any area of sky will yield results. 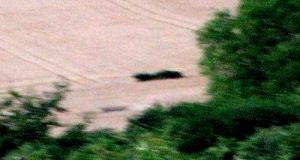 this may be the same craft as the above one . It may also be an opposite!note the shadow beneath !They also emit a force field around them like a shield or cloaking device and to a human being it may seem just like a normal patch of countryside although it may look out of focus. They hide within  many areas. It takes many photographs to learn how to recognise them. Earthly nature is good enough in mimicry;for example a tiny orchid plant may not only look like a wasp but emit pheromones to lure them in and to trick them into taking pollen to take to another dishonest participant in their quest to pass on their own genetic material. Delusional evolution is not too common among earthly species but those that do, seem to show alien like characteristics.Are earthly plants highly advanced ? Just imagine what highly advanced human beings could do in the distant future. Maybe it had already been done. We maybe so blind, and for good reason, yet we have so much to learn. 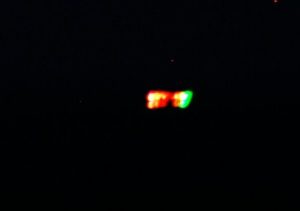 familiar shapes occur as if the same craft can change its shape and colour but also retains some typical shapes which may give it away.Many of these craft work on a reflective principle, as if they are above water but of course it is simply air, no clouds but clear sky. they may use a binary system. the reflections are not opposite like a mirror but a weakened version of the real thing. they are always in pairs, sometimes faintly, and the majority of certain types of ufos will show this reflection somewhere even if not obvious at first. 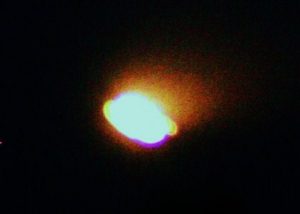 When these craft are directly above they are beautiful and typical flying saucer shaped.The purple glows around the edge are the real colours and only basic contrast and colour have been added to all of my photos;i like to keep them as natural as possible. 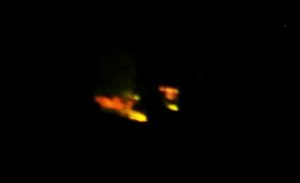 Some look bazaar.The photo on the right was of a pair of craft working together above a remote farm house. It maybe that humans are being observed or even used for various means. some call it abduction, I call it scientific analysis. 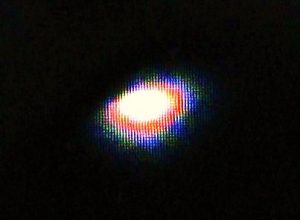 Other craft can only be seen with infra-red scopes and many craft can be in the sky at one time, it looks like a very busy airport. Many craft land on the ground and conduct what look to be like scientific analysing or collecting of materials. when this happens many small craft flash about like tiny scout craft. I have not shown any of the data i have seen regarding the infra-red equipment as most of that was seen by myself from the use of another person and i will not use that persons own footage, even if i have permission. All of these photos on this website are purely my own photographs but the odd few on other blogs may be from other people but if they are then it is stated so. 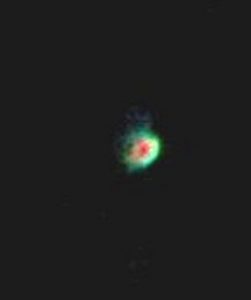 Many of the anomalies have no visible structure but may be just made up of light wavelengths.One can see the lights but not the main body of the craft. this is not always the case and often one can see the body with a certain camera but nit the naked eye and sometimes vice versa. 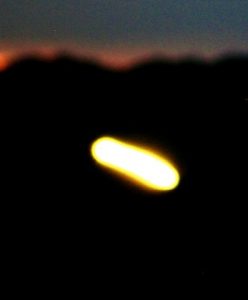 At other times light phenomenon came towards me and were managed to be captured even though one could see them with naked eyes.It just goes to show what we cannot see that maybe around us all the time but with the advancement of certain technologies, we are now able to see and record the real world as we have never seen it before and in doing so we may them acknowledge what we once thought was impossible.

So called UFOs are all around us all the time. We are totally oblivious to them. They were called the watchers in ancient times as the concept is not new at all but so old and there are so many references to them in ancient texts from all around the world, in all religious writings and in all faiths the sky beings or watchers have shaped humanity.

There are good beings and bad beings, some had good agendas with us and others had bad agendas but it is worth noting that we were never a simple evolutionary happening in the way typical Darwinian believers except.  As we get more advance technologically, we will understand the true concept.

We were told that we would achieve great things and even become like gods ourselves. Now we have genetic advances at our fingertips and we also can create life by genetic manipulation . we could also take a rib from a man and use stem cell technology to create, it is just that we had no concept of it hundreds or thousands of years ago, but now there is no excuse not to understand, but it is the way it was meant to be. Everything has a time and a place. The generations of humans in the future may have more acknowledgements at their disposal but a great lot of damage will also be done and many revelations hidden as always. It is up to the individual to seek and then may they find as it has always been there for those who have eyes and ears. The educations we have all received have been flawed from the start, and governments and space agencies have corrupted and hidden much knowledge of which would have helped mankind live in peace rather than self destruct.There is without doubt an evil side to humanity and it comes possible to us via several means, one is past genetic manipulation. It maybe that the bad gods also called the devil have put bad genes within to cause our self destruction and that of the earth whilst the good guys have striven to try to keep us on the straight and narrow by placing good genes within us. we are a mixture of both but we have choices!

In the future, we humans will not just acknowledge that time travel can happen, but we will become masters of the art . There is so much to learn about particle physics and the universes that we live within and how to skip from one to another. Light changes everything and our abilities to understand it and its true properties will change us forever. We have already been there and will be there again as history always repeats itself and i must also quote the very old saying as above so below. It is one of many answers to everything.

We are at a critical point in our evolutionary process but we are also blind to what is going on. human intelligence seems to be waning !It may be designer operated to some extent mainly by humans ourselves as we all have and live by natural evolutionary traits and instincts. We must resist the beast (animal instincts), and look further ahead. the natural instincts have shaped us and were crucial to our development originally of course but now we do not need them so much. We were given a huge brain for a reason, lets start using that redundant part , possibly one third of the potential and use it to become spiritual being of love, respect, peace and harmony as I believe that that is the right way.

We no longer need to be earthly animals, but spiritual beings. It will mean a huge change in our belief systems, culture, behaviour and everything. to get there there will need to be huge changes that will be beyond our current comprehension.

We have to change drastically if we are to survive. We tend to abuse our gifts by wasting our time doing senseless things.If we used those inbuilt traits to do good then we could change overnight.

The biggest problem is human overpopulation. this is the main course of destruction and secondly poverty and thirdly education.