As usual I am very worried regarding the future of our lowland heaths. There are meant to be stringent laws and regulations regarding the protection of these rare habitats and one would have thought that over the last few decades of heathland protection, that conservationists would know the difference between right and wrong management practices. However, this is obviously wrong.One of our best tracks of lowland heath within Dorset is Arne heath nature reserve run by the R.S.P.B. When i was a young boy, I was out with the conservation volunteers clearing scrub especially encroaching pine trees, by pulling them up in their thousands every winter. since the nineteen eighties, this practice was not used so much as the heaths were grazed by deer, sika deer which do a grand job naturally manicuring the heather,gorse and eating the seedling pines. The R.S.P.B along with other conservation bodies have waged war on sika deer and near on eliminated them from the reserve and many other parts of Purbeck heathland.This is an Eco disaster. Without these beneficial animals doing this, Arne has sprouted thousands of small pines all over the area and the young trees are about three to four years old, which would suggest that teams of people have not been pulling them for this length of time.The heath is becoming overgrown. Also with no deer, there is no dung for the many species of beetles and fly to use, some use the dung of cattle but it is the larger beetles and flies that need the deer pellets, and these beetles feed the birds and reptiles. Deer do not destroy reptile sites like heavy cattle do and do not over graze as some of the staff have stated. When local visitors ask where have all the deer gone, they are told that they were starving and overgrazing the area. this is of course very wrong. How much longer are we going to be told lies by the R.S.P.B staff? Many good naturalists are very worried about this situation. 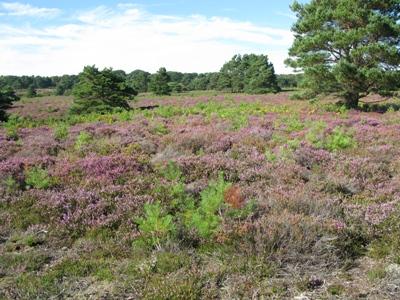 All the green bits, are small pine trees. There are no deer here to graze them out. 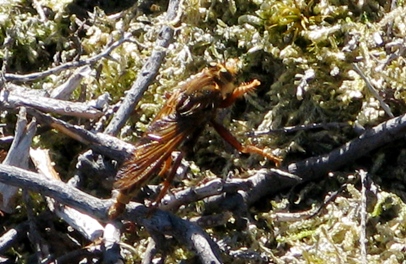 This rare fly(Asilius crabroniformis)(hornet robber fly) can be still found on the heath but is becoming scarcer as the deer are taken out. I do hope that modern conservation bodies realize their mistake, but as usual with humanity, we only know what we have lost after it has gone and by then it is too late. The deer may have needed to be finned out a bit, but not near on eliminated. Sika deer are so similar to red deer and do the same job .In the past, there were herd grazing this very heath before the nineteen fifties, so nobody can claim that they are a none native invasive species in the same way as a few other species, and besides they have natural predators. Pumas and leopards have been eating them for decades and have used Purbeck as one of the main healthy breeding areas simply because of its bio diversity and especially because of the large amounts of deer were enough to sustain them. now there is not enough along with poaching and road kill, let alone the eradication(see my big cat blog) programme.There may be more domestic stock taken, more birds, and dogs taken because of this.

The Japanese sika deer (Cervus japonicus) has been a welcome addition to British wildlife and adds that special completeness in the wake of the red deer going.The species brings many visitors and naturalists to Purbeck especially during the rutting season after September to November. 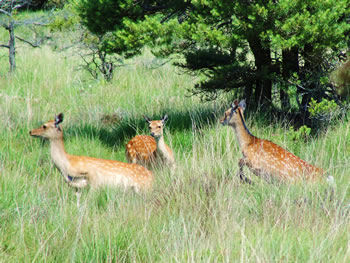 A small herd of sika hinds that are clearly not overgrazing the heaths.

house sparrows are on On another note, some good nthe increase due to some local councils not cutting roadside verges. Grass needs to flower and seed to feed finches. Sparrows depend on this for their survival and in recent times this species has had to adapt. Many sparrows feed mainly on spiders around the houses, but on the Bournemouth cliff tops, this year the council have not cut the grass (thank goodness) which means a whole variety of species benefit. These sparrows are eating the seeds of grass, tree lupin and sea beats. As long as long grass is available then this flock will survive. 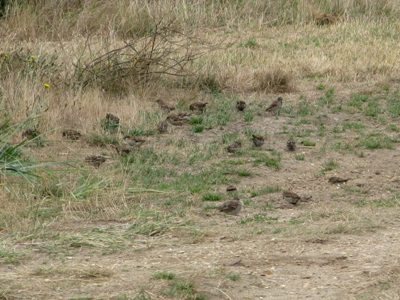 The western green lizard(Lacerta Biliniata) has returned from a near absence with several adults being seen. Over collection and bad weather for the last three years saw their numbers crash. There are now only approx a third of the numbers there were six years ago.This species has no legal protection in this country as it is thought to be a none native, which really is not true. reptiles naturally colonise by several different means and regardless of this status they should still be protected in the UK as in Europe. We need this species here and they do not out compete with other native species as they evolved alongside them.  We have to consider global warming and the natural movement of species. 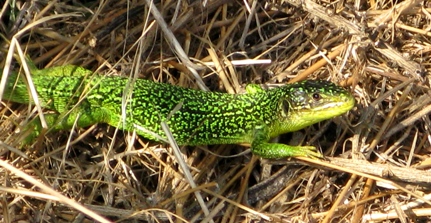 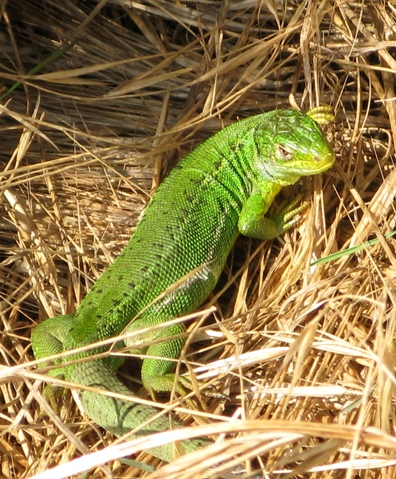 A female mature green lizard basks. I hope her eggs hatch to create a new generation. This species must survive, even if they are not natural colonies. There are no sand lizards (Lacerta agilis) within the areas where the green lizard lives, so they do not pose a problem , and nearby colonies of the former are not in good health anyway as they are inbred, and most of them live on the open heaths rather than the small strip of coastal cliff. It is best to allow in the wake of global warming as in the future the area may be too warm for common lizards and even perhaps the sand lizard. This species, along with the common wall lizard(Podarcis muralis) can be the adapting species needed to fill the gap.